You are at:Home»On Watch»Hunt, Huckins, Back Cove Big Winners in Newport

The Hunt 63, the Huckins Sportsman 38, and the Back Cove 39O were big winners at the Newport boat show, all collecting awards in various categories. The electric outboard by Flux Marine won an award in the show’s green products category.

The awards are part of the show’s Newport For New Products showcase, open to domestic and foreign products that were launched in the U.S. after April 1, 2021, that made their debut at the Newport show. Winners were selected by a panel of judges, industry experts, on the basis of innovation, value to the consumer, safety, and aesthetics. An additional People’s Choice Award was based on votes cast during the first day of the show. All the award winners were announced at a breakfast the next morning.

The Hunt Ocean 63 (pictured at top) won the award for Best New Powerboat 40 Feet and Over. With its iconic Hunt deep-V hull, the Ocean 63 is designed as an expedition yacht that will perform well in any sea conditions anywhere in the world. It has a 20-degree deadrise at the transom, and is  powered by twin 1,000-hp Volvo IPS1350 pod drives, producing a top speed of 31 knots. At 10 knots, the new Hunt has a range of 1,150nm. 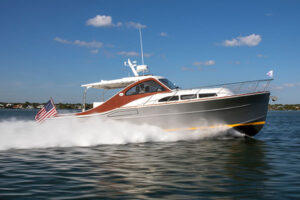 The Sportsman 38 by Huckins won the award for Best New Powerboat 21-39 Feet. It’s a hybrid yacht with diesel and electric power. It combines a retro-classic look from the 1930s with state-of-the-art technology. On battery power alone, it can run at 7 knots for two hours – in complete silence. Push a button, and the boat converts to twin diesels, cruising at 30 knots or so. 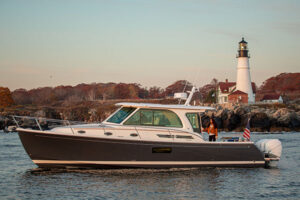 The Back Cove 39O won the People’s Choice Award. Powered by three 400-hp Mercury Verado outboards, the new Maine-built cruiser tops out at 44 knots, making it the fastest Back Cove yet. It’s also the quietest, registering a sound level of just 73 dB(a) at the helm. It has a fully enclosed helm deck and versatile accommodations to fit various boating lifestyles. 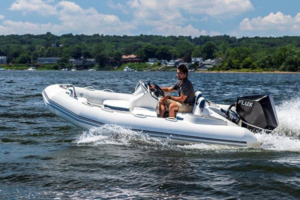 The electric outboard engine by Flux Marine won the Green Products Award. Advanced technology produces 40-hp of continuous power with a 50-mile range. You plug into shore power to fully recharge the batteries overnight. Meanwhile, there are no emissions, smoke, noise, or winterization. Read more: