Maritimo, the highly respected Australian builder, just announced that it is building a new S55 offshore sports sedan that will be ready next year. The new low-profile sedan is designed for long-range adventures and offshore cruising.

The new S55 has a contemporary open plan, with a light-filled salon, galley aft, large cockpit for entertaining, and three staterooms with two heads below. It also has a unique expanded hardtop that goes all the way aft over the cockpit and is meant to be used as a utility space for toys or watercraft. You reach it via a ladder from the cockpit and a large hatch; renderings show a davit up there.

The boat will be powered by twin 670-hp Volvo D11 diesels. We don’t have details yet, but Maritimos are known for their range, seaworthiness and generally high quality of build, all desirable qualities for Australia’s often rigorous waters. (I drove a new Maritimo flybridge cruiser off Brisbane a few years ago and it was one of the most solid boats I’ve ever been on.) 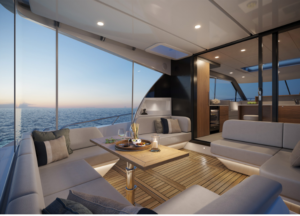 The new S55 features several large social and relaxing areas. The cockpit has a U-shaped seating area with a table all the way aft. Other lounging areas are on each side. A large sun pad is on the foredeck.

The galley is aft in the salon, so it is easily accessible to the aft deck. Going forward, there’s an L-shaped lounge on the port side, and another L-lounge with a table to starboard. Forward to starboard, there are two helm seats, and the mate’s seat can swivel to face aft and become part of the salon social area.