You are at:Home»Charter»MarineMaxVacations Adds New 545 Power Cat to BVI Fleet

MarineMax Vacations just announced that it will introduce its new flagship, a 545 power catamaran, to its charter fleet in the British Virgin Islands. The large and luxurious cat, with five cabins and five heads, will be available for charter starting in February.

Since the new cat can hold up to ten people, you won’t have to worry about leaving anybody behind on your next charter. Bring all your family, or a group of friends, and enjoy a relaxing charter in some of the best cruising grounds in the world.

MarineMax says you can charter the 545 as a bareboat, so you can have maximum privacy and run the boat yourself, or as a crewed boat, with a captain and a cook; all you need to do is relax.

The MarineMax 545 is basically the same boat as the Aquila 54, but made for charter. Aquilas are made by Sino Eagle in China, and are sold to private buyers as well as put into charter in the MarineMax Vacations fleet. 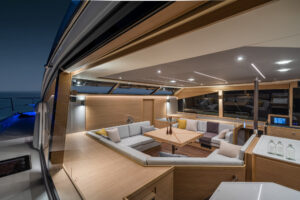 The boat has an enormous amount of space; its 25’ 2” beam is almost half its length, so there’s lots of volume inside and outside the cat. All the way aft, large steps on each hull lead up from the adjustable swim platform to the aft deck, which has a separate dining area next to an indoor/outdoor bar.

In the salon, the fully equipped galley is aft and opens to the cockpit, while the salon itself has an open plan with several seating and lounging areas. Large tempered-glass side windows let in a lot of natural light.

Stairs lead from the aft deck up to the flybridge with a barbecue and outdoor kitchen, a protected helm and innovative stairs leading down to the foredeck, which makes use of the full beam to serve as a sunning and lounging center. See the video below for a walkthrough of the boat.