Helmsman has updated its 43E Pilothouse trawler, originally introduced five years ago, and has already delivered two of the new models and is finishing work on a third. The changes, including providing more interior volume in some places and tweaking the appearance in others, were all in response to feedback from owners and would-be owners.

The Helmsman 43 is a two-stateroom, two-head, sturdy long-distance cruiser with both a raised pilothouse and a flybridge. It has a semi-displacement hull with soft chines, a deep forefoot, broad sections aft for stability, a full keel, a large rudder, and a full skeg. 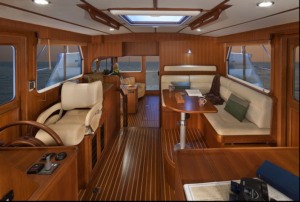 The Helmsman 43E was a step up from the company’s popular 38E, which won the People’s Choice Award at the Seattle Trawlerfest in 2019. The new 43 has more volume in the guest stateroom and the forward head, while new molds altered the camber of the pilothouse roof and retracted the forward windshield. The new boat also has windows from Bomar, built to order in New Hampshire. Soundown acoustic insulation foam was added under the master stateroom.

Helmsmen are built in Fuzhou, China, and are designed for owners who want a quality cruising boat but don’t want to overpay for one. They also require minimal exterior maintenance. Base price for the 43E in Seattle is $635,000.

The 43 has a full-beam, open-plan salon, with the galley up; it leads forward to the pilothouse, with both port and starboard side doors. Outside, safe stairs lead up to the flybridge on both sides. Below, the master stateroom is forward, while the guest stateroom is aft a bit on the port side.