Coastal Craft just launched its new 41T, a sturdy, fast cruiser that is built for the waters of the Pacific Northwest and that tops out at 45 knots, powered by four 350-hp Suzuki outboards. The new Coastal Craft has two staterooms and one head, and the cockpit can be customized for fishing or cruising applications.

All Coastal Craft are made in Gibsons, British Columbia, above Vancouver on the Strait of Georgia. They are made out of marine welded aluminum, with polyurethane foam insulation in the hull and cabin. The company pays particular attention to detail and its joinerwork, as well as to the boats’ seaworthiness.

The new 41T cruises at 35 knots, with the four Suzukis; the company also offers four 350-Mercury outboards. The hull has an aggressive entry, a deep V with a 20-degree deadrise at the transom, reverse chines, and lifting strakes. It has an air draft of just 12’ 6”.

The salon is a large social area with a wrap-around settee that seats six people. The helm and co-pilot seats are raised to provide excellent forward visibility, particularly important in the waters off British Columbia that are filled with deadhead logs often lurking half submerged. 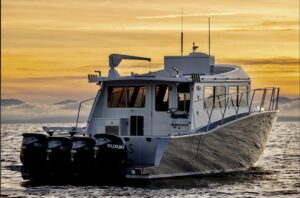 The galley is  up with an oven and range, either propane or electric (the 41T has a 9kW genset), dishwasher, microwave, quartz countertops, a pull-out pantry, and drawers for storage.

The main cabin is forward with a queen island berth, port and starboard hanging lockers, nightstands, and side shelves. The head is finished in black walnut with quartz countertops and a teak sole. The separate shower has a comfortable seat. The guest stateroom is under the salon, and has two single berths that convert to a queen.

The cockpit has mezzanine seating or a cabinet, two large in-deck fish boxes or storage lockers, fold-down seats at the transom, and port and starboard dive doors. The cockpit deck is far enough below the gunnel to provide a secure position while fishing in the ocean. You can get the boat with a second set of controls in the cockpit. The cabin top can hold a davit/crane for a tender, a set of kayaks or a freezer box.

I tested a Coastal Craft cruiser in Vancouver several years ago with Jeff Rhodes, the company’s founder and CEO, and I was impressed with the boat’s level of quality, inside and out, as well as with its obvious seakeeping abilities.