Moving On – and Moving Up – With a Dedicated Cruising Couple

It would be hard to find a couple more committed to the cruising life than Jim and Lisa Favors. Indeed, they’ve been boating for most of their lives, starting with a 20-foot Four Winns in their home town of Traverse City, Michigan, moving up to a 32-foot Silverton, a 42-foot Silverton and finally a 40-foot Fathom trawler. They lived aboard the two 40-footers full-time for five years after Jim retired, completing the Great Loop once and returning to favorite spots to almost complete it a second time, cruising often with Jim’s three sons and each of their mothers – separately.

But then five years ago the Favors downsized, a lot. They realized there were a lot of rivers and places they wanted to see that were hard to get to on a 40-footer. So, they sold the Fathom, bought a Ranger Tug 27, which they named Kismet (above), and started a new way of life. They wanted to reconnect with their families, so they bought a home in Traverse City and then trailered Kismet all around the U.S., using the boat as a “boaterhome,” staying in RV parks on their way to new cruising destinations, from Puget Sound to Lake Powell to the Florida Keys. The Favors enjoyed this lifestyle so much they wrote two books about it, “When the Water Calls, We Follow,” and “Women on Board Cruising,” and started blogging about it.

I did a double take a few day ago when I opened my daily email from the America’s Great Loop Cruisers’ Association to see a picture of Kismet, with its “hero red” hull, for sale. Were the Favors giving up on the cruising or boaterhome life they seemed to love so much? Well, no. After their major downsizing five years ago they are now just moving up – a notch – to a new Ranger Tug 29, which also is an easily trailered pocket cruiser. You can read more about their upcoming adventures here: http://trailertrawlerlife.com http://rangertugs.com 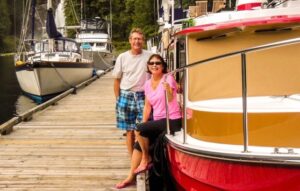