After Completing the Great Loop, a New Jersey Couple Plans to Keep on Cruising – in a Bigger Boat

There’s no stopping Clark and Evelyn Woodworth, a retired couple from Rumson, New Jersey. For a while, after they completed the Great Loop a year ago, they thought they were finished. Then they bought a bigger boat…

Avid boaters, the Woodworths started planning for the Loop more than a decade ago; they owned a Mainship 350, named Sea Moss, that they had bought new in 1999. They took Power Squadrons courses; Clark even took a Yanmar diesel engine course so he could work on the two Yanmar 230s on the boat. But life – job, families, finances – kept getting in the way.

Five years ago, they finally took off, on the Triangle Loop, up the Hudson to the Erie Canal, into Canada and the Rideau Canal, around to Ottawa and Montreal and finally back down through Lake Champlain. They were hooked; they loved the cruising life.

So two years ago they started the Great Loop on Sea Moss, with Evelyn writing an almost daily blog (called “seamossgreatloop.blogspot.com”) an entertaining real-world look at living aboard and full-time cruising. Hitting a universal nerve, she wrote that they generally judged a marina by the quality of its restrooms and showers. “I use the shower on the boat as a last resort only,” she said, because the Mainship held only 60 gallons of water and they used the shower stall for extra storage. Last July the Woodworths crossed their wake off Sandy Hook, having spent 365 days cruising, covering 6,124 nm at an average of 8 knots. They thought they were done.

But they realized that what they really wanted was a bigger boat, specifically a 52-foot pilothouse Krogen Express that cruises in the 15-17-knot range; they had seen some at various boat shows. While visiting their son in Connecticut last September, they made a side trip to the Newport boat show where they stopped at the Krogen Express slip. “The owner of the company knows us by name since we have toured his boat so many times,” Evelyn wrote. They couldn’t afford a new one, but they learned about a brokerage boat in Florida.

Last December, after an inspection, sea trial and banks loans, the Woodworths bought Wilhelmina, a 2008 Krogen Express (pictured above) in Fort Pierce. Instead of coming straight home, they took a shakedown cruise across the Okeechobee to Fort Pierce, down to the Keys and ultimately  back to Sandy Hook at the end of April, where they’re waiting for summer cruising. And Evelyn doesn’t have to worry about marina showers any more. The Krogen Express, which they renamed Sunset Delight, has two heads with showers and holds 370 gallons of water. 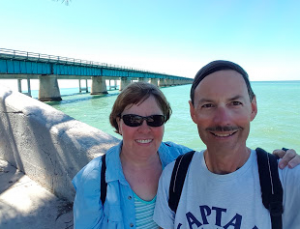