And they’re off. After a year of planning, David Jenkins and his wife, Sue Ellen, from Annapolis, and his brother-in-law, Blake Eder, a professional delivery captain from North Carolina, just left Anacortes, Washington, on the start of their epic 10,000 nm cruise around the United States, on the Jenkins’ new 40-foot Aspen power catamaran Knot Wafflen’. And they started by heading north, to Juneau, Alaska, before planning to turn around and circle the U.S., ending up back home in Annapolis in October, 2018.

The 10,000-mile tour is the brainchild of the Jenkins, Eder and Larry Graf, who founded Aspen Power Catamarans in 2008 (after founding Glacier Bay cats in 1987) and who likes to think outside the box. Jenkins previously had an Albemarle 27 in the Chesapeake but, with the help of Eder as captain, he wanted something bigger to tackle longer cruising. A neighbor had a cat, and Jenkins liked the idea of a cat’s stable platform, ample space and fuel efficiency.

After talking with Graf at a boat show, he and Eder ended up taking a sea trial on an Aspen cat in Seattle. Jenkins liked Aspen’s asymmetrical design, where the starboard hull, with the single diesel, is 35 percent larger than the port hull, to reduce drag, improve fuel efficiency and provide a soft ride. “Then we went to the factory,” he told me. “I was sold. I saw they were built the right way.”

Jenkins bought an Aspen C120 cruiser, with three staterooms, two heads, and a 360-degree view from every seat in the salon. Powered by a single Volvo 330-hp diesel, it cruises at 17 knots, burning only 11 gph, and tops out at 22 knots.

After Jenkins and Eder cruise back down the west coast, they will join the Baja Ha-Ha in October, explore the Sea of Cortez and then put the Aspen on a truck and trailer it to Galveston, Texas. Jenkins said he wasn’t particularly happy with the idea of cruising down to the Panama Canal (“It’s too much risk,” he said), and Graf liked the idea of demonstrating that the boat could be trailered easily from one destination to another. From Galveston, they’ll cruise to Florida and the Bahamas before ending up in Annapolis in time for the power boat show there a year from October. “By then,” Jenkins says, “we should have all the bugs out of the boat.”

The boat has the new Mazu app from SkyMate to stay connected offshore or when it’s out of wi-fi range. You can follow its progress here:  http://aspenpowercatamarans.com 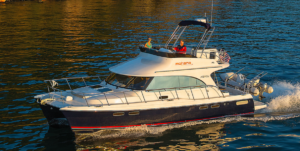 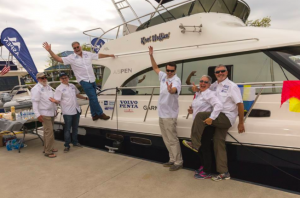