At Sea Once More, the Hamiltons Are Halfway to Ireland on their Nordhavn 52

James and Jennifer Hamilton are at it again (or more accurately, are at it still). The Hamiltons, a high-tech couple from Seattle, have already cruised around the world on MV Dirona, their 52-foot Nordhavn. Last year they cruised 3,650 nm from St. Helena in the South Atlantic to Barbados, the longest nonstop voyage ever taken by a Nordhavn under 100 feet. Now, they’re in the middle of a 3,000-nm cruise from Newport, Rhode Island, to Ireland. After that, they plan to head for the Scottish Isles for a while, go to Norway next summer and finally return to the U.S. in 2020 via Iceland and Greenland. Or not. As James has said, “the more we travel, the more willing we are to change our minds and direction entirely.”

The Hamiltons bought Dirona in late 2009, making more than 230 changes during construction. They previously owned a 2000 Bayliner 4087, living aboard for a year and cruising up to Alaska. They wanted a Nordhavn for its range, its ability to take them anywhere in the world, and its liveaboard comforts as a waterfront condo while they were working in Seattle. They named the boat after the Dirona Albolineata (pictured below), an invertebrate they looked for while Scuba diving in Puget Sound. “Their fantastic forms and psychedelic color make them among our favorite sea creatures,” Hamilton said.

They started serious cruising on Dirona in 2011, spending time in Alaska and writing a Waggoner Cruising Guide, before embarking on their circumnavigation a year later. They now have more than 8,000 hours on Dirona’s John Deere diesel.

A 50-something Canadian, Hamilton started out as a car mechanic, but not just any mechanic: He specialized in Lamborghinis and Ferraris. An engineer by training, in the ‘80s he left cars for a digital career, working first at IBM and then on the Data Center Futures team at Microsoft before moving to Amazon. He’s now regarded as an industry guru as a Distinguished Engineer at Amazon Web Services, a multi-billion-dollar cloud computing business serving such companies as Netflix, Pinterest and Dropbox.

Hamilton continues to work while cruising. “Working remotely is more work and at times can be frustrating,” he said, “but the opportunity to cruise the world is wonderful. Given the choice of putting off a world cruise to when one’s health may no longer allow it, or doing both work and cruise at the same time, the latter is clearly the better choice.” For now, the Hamiltons plan to own Dirona and cruise indefinitely. You can track their progress here: 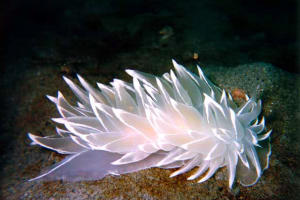 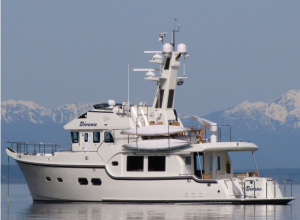