You are at:Home»Cruising Life»4,465 Milles of the Great Loop Alone on a 14-foot Walker Bay

You’ve got to love Dave Pike (at least I do). On his blog, where he explains why he’s doing the Great Loop in a 14-foot Walker Bay RIB, he introduces himself by saying, “I’m a 67-year-old male with a bit of adventure in my DNA.” He’s climbed mountains, paddled canoes through the Canadian wilderness, and started cruising when he and his wife Ann chartered a trawler in Alaska 15 years ago. And now he’s just gone through the Erie Canal on his Walker Bay, putting 4,465 Great Loop miles behind him, as he starts the last leg of his solo trip, heading back home to Grand Haven, Michigan.

The Pikes got into serious cruising when they moved from Michigan to Washington State in 2003 and bought a Kadey-Krogen 42. They cruised through the San Juans and up the Inside Passage to Alaska, and they loved it. But three years ago they sold the boat when they moved back to Grand Haven. Then Pike’s DNA kicked in. He wanted to do the Great Loop, in a small RIB, by himself, but only if Ann would drive or fly to join him periodically along the way. She agreed.

A retired engineer, Pike decided on a Walker Bay Generation 450 because at 14’9” it was long enough for him to sleep on board if need be; he also packed a tent so he could camp out in parks, although he planned to spend most nights in hotels along the way. He wanted a small boat so he wouldn’t have to worry about height or draft problems, and to keep his costs down. And he installed a Bimini and side curtains on the Walker Bay for some weather and bug protection. With a 60-hp Honda four-stroke outboard, the Walker Bay weighs 900 pounds. Pike appropriately named it Journey.

It has an internal 15-gallon fuel tank, but Pike added two five-gallon jerry cans of gas. For electronics, he installed a Garmin chartplotter, VHF and AIS.

Pike left Grand Haven last Aug. 7. So far, most of the trip has gone according to plan. The Honda has been flawless; the only problem occurred last week when he had to change the prop after he hit something submerged near Utica in the Erie Canal. He did indeed spend a few nights sleeping on the boat or in the tent nearby, but more often he used Uber to find a local hotel. And Ann did meet him for shoreside reunions several times along the way.

Basically dividing the Loop in half, Pike left Journey in Fort Myers Beach, Florida, last October and spent the winter with Ann at their second home in Festival, Arizona. He picked the boat up again in April, heading across the Okeechobee and then up the east coast. He said the difference was mainly the number of other boats he encountered along the way; he often was traveling alone on the rivers of the first half of the Loop, while he often was with other boating traffic coming up the ICW. But his routine never changed: Every night Pike programmed his iPad for the next day’s route, and then transferred it in the morning to the onboard chartplotter. And he paid attention to the weather, not taking any extra chances on a 14-foot boat.

Now that the end is in sight, Pike says he’s just “crossing my fingers for calm seas.” And when he gets back home, he plans to spend the rest of the summer taking his grandchildren out on Journey in a local lake. 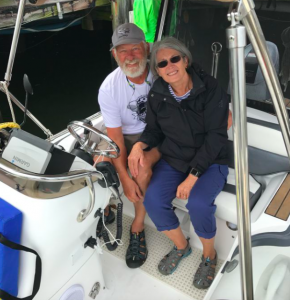