After 35,000 Miles, The Ullmanns Are Just Getting Started

So far, Jennifer and Mark Ullmann have put about 35,000 nautical miles on Starlet, their 17-year-old Nordhavn 46, and they’re just warming up. Right now, they’re in the Marquesas in French Polynesia, deep in the South Pacific (pictured above), and that’s about half way ‘round in their planned circumnavigation.

Until about ten years ago, the Ullmanns were living traditional lives on land, although they both loved diving and had a 24-foot dive boat in the Florida Keys. Then, after a bad day at work, they were having dinner in a Thai restaurant and they started talking about all the places they’d rather be. As it turned out, all of them were accessible by boat. Jennifer says she just blurted out that they should buy a boat and go.

It took more than a few years of preparation after that. Mark already had a Coast Guard license, but Jennifer took Power Squadrons courses, they chartered a Mainship trawler in Miami for a two-month cruise to the Exumas, they read books and went to boat shows.

The Ullmanns finally bought Starlet in 2011 and retired a year later, selling their cars, their house, even their dive boat. They were hooked. After cruising up and down the East Coast and the Bahamas, they crossed the Atlantic the first time in 2012. Starlet cruises at 6.5 knots and holds 1,000 gallons of fuel. The Ullmanns first cruised to Bermuda, then had an 11-day crossing to the Azores in 20-foot following seas, and finally reached Portugal.

The Ullmanns have been cruising ever since, crossing the Atlantic westbound, spending time in the Caribbean, transiting the Panama Canal to the Galapagos, and now relaxing in the Marquesas. They like the Marquesas so much that Jennifer says they may spend a year there. Then it will be time to get underway again to see the rest of the world. (The picture below shows them celebrating their 35,000-mile mark while crossing the Equator.) 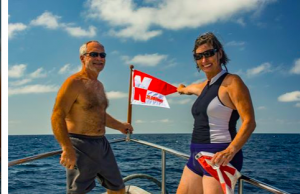