Ensenada’s the Place to Be, with Pendana, Knot Wafflen’ and the CUBAR Boats All There at the Same Time

One of the best things about cruising is the serendipity of it all. You never really know what’s going to happen next. One of the pleasures of cruising on a well-found boat is that you can act on a feeling, an impulse, or just a hope, and change course to take in something that looks new, different, enchanting. And you never know who you’ll run into along the way.

That was certainly the case with James Ellingford, the Australian businessman who’s on a six-year world cruise on Pendana, his Nordhavn 62 with his wife and daughters. Having crossed the Pacific and cruised up to Alaska and then down to Los Angeles, Ellingford just crossed into Mexico. He was approaching Ensenada, about 65 nm below San Diego, and wasn’t sure where to stay. He said he contacted the Nordhavn Owners Group for advice; most of them told him to keep going, even all the way down to Puerto Vallarta.

Following his hunch, Ellingford turned in at Ensenada, tying up at the Hotel Coral & Marina (pictured above). And he’s loving it. The marina is great, he says, with lots of amenities (swimming pools, fitness clubs, restaurants and boat maintenance), and the wi-fi is better than he had at Marina del Rey in Los Angeles. The people are friendly, the sunsets are some of the best he’s seen anywhere, and there are no security issues. Ensenada, Ellingford wrote in his blog, “can hold its head high, as for us this is a special little place we will long remember.”

As it turns out, Ellingford was not the only long-range cruiser there. In fact, he ran into Knot Wafflen’, the 40-foot Aspen Power Catamaran that’s on its 10,000-mile tour of the United States, having started out in Anacortes, Washington, last May, before heading up to Juneau, Alaska and then turning around to head down the west coast, much like Pendana. (Knot Wafflen’ is pictured below also in Ensenada.)

Then Ellingford ran into more Nordhavns coming in to Ensenada as part of the 24-powerboat CUBAR rally from San Diego to La Paz. The CUBAR (Cruise Underway to Baja Rally) boats will only stay in Ensenada for two nights before heading south. David Jenkins, the owner of Knot Wafflen’, also will head south and spend time in the Sea of Cortez before putting the boat on a trailer and shipping it to Galveston, Texas, where he’ll relaunch it and cruise around Florida and north to his home in Annapolis in time for the boat show there next October.

For now, though, Ensenada is the place to be. Whether you planned for it or not. 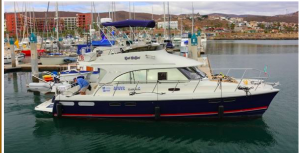