After the Great Loop, the McVeys Keep on Cruising: “There is so much more to see.” 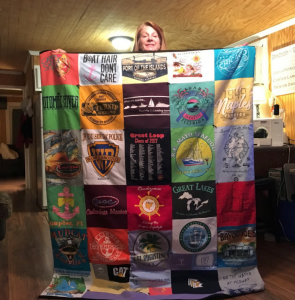 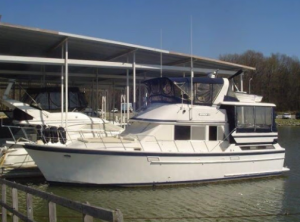 Charlie and Robin McVey from Louisville, Mississippi, just don’t know how to quit. Indeed, they’ve been cruising on their 42-foot 1986 Jefferson Sundeck trawler The Lower Place most of the time since they retired more than two years ago. After a few break-in cruises, they started the Great Loop at 5 am on Oct. 23, 2016, and completed it 343 days later, passing through 17 states, the District of Columbia and parts of the Bahamas and Canada.

Back at their home port of Fulton, Mississippi, the McVeys celebrated crossing their wake with the gold burgee from the America’s Great Loop Cruisers’ Association, but decided they weren’t going to stop. Robin wrote on their blog, “We have decided we are NOT DONE cruising!!” She put together a quilt made of T-shirts they collected along the way for a “very therapeutic walk down memory lane,” and they put The Lower Place on the hard for some long-overdue repairs and maintenance.

And then, deciding “there is so much more to see,” they left in February on what was for them a short jaunt down the Tenn-Tom Waterway to Mobile and across the Gulf to the west coast of Florida, making it all the way to Gulfport, Florida, near St. Pete, for Easter. Then they retraced their steps, taking the boat back to Pickwick Lake, a large TVA lake on the Tennessee River near their home where they’ll spend the summer with family and friends. Then they’ll start cruising again. “The Lower Place will be heading south when the leaves begin to fall,” Robin wrote.

The McVeys are modest about their Loop adventure, writing that “we are just a couple of average people on an extraordinary adventure.” During the Loop, they did it all: They anchored out, they stayed in marinas, they cruised through beautiful days and stormy weather, they had heavy rain and also draught; they had to deal with mechanical issues and they had easy cruising. They made new friends. And many times, in many places, they realized the kindness of strangers. Their favorite spot (shared by many others): Georgian Bay in Ontario.

“This has truly been the trip of a lifetime,” Robin wrote. “Any bad day was minimized by the overwhelming good days. Any mechanical issues were quickly remedied with a suggestion or hands-on correction by another looper or well-positioned professional. Any homesickness or emotional meltdown was cured with empathy, shared tears, then laughter.”

Her advice to anyone else thinking about cruising: “Step outside your comfort zone. Look beyond yourself. Life is worth living; don’t just exist.” For more: