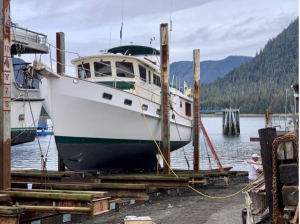 It’s the end of the season for Jeff and Susie Parker on Idyll Time, their 48-foot Kadey-Krogen North Sea Trawler. They just hauled the boat in Petersburg, Alaska, and posted their last cruising blog for the year. They also posted their best wildlife pictures, which are a real treat; see them below.

The Parkers’ home port is Chattanooga, Tennessee. After they bought Idyll Time new in 2006, they cruised up and down the East Coast, they did the Great Loop, and they spent so much time on the Intracoastal Waterway that Parker said it had become routine.

They wanted to expand their horizons, and they had the boat shipped to the Pacific Northwest. In their end-of-season post, they said this year they spent 156 days on board, leaving from Anacortes, Washington, last April, cruising some 3,041 nm. And they took pictures all along the way.

The Parkers decided to leave the boat for the winter in Petersburg so they didn’t have to make the 1,000 mile trip back to Anacortes, with another 1,000 mile return trip next spring. Leaving it there, they said, will give them more time cruising in Alaska.

Furthermore, they like Petersburg. “The small community of about 3,000 people has a strong sense of identity and pride arising from its Norwegian heritage,” they said. “The marina is one of the best run marinas in Alaska. There is an active fishing fleet of about 1,000 boats and the marina operates 24/7, 365 days a year. The harbor is very well  protected from the wind, and the water does not freeze.” And Idyll Time will be in good company. There are three other Krogens and several other trawlers in the marina.

See the Parkers’ blog, and take a look at their wildlife pictures, below: