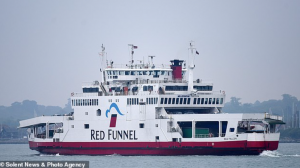 Even after his 305-foot passenger ferry ran into a 32-foot Doral cruiser with four people on board on the Solent near Southampton, England, veteran ferry captain Ian Drummond, 62, didn’t seem to feel much remorse. “I’m the dog’s badoodahs out on the Solent,” he told investigators from Britain’s Maritime and Coastal Agency. “I don’t know what to feel guilty about. I’m as good as it gets.”

Drummond’s remarks were played in court, where prosecutors said he failed to keep a lookout on the day of the accident, Sept. 29, 2018. “If there had been a proper lookout, the vessel would have been sighted and avoided,” they said. For his part, Drummond said he was completely “unaware” that his Red Funnel ferry hit a boat. He said that modifications made to the ferry five years ago, elevating the bridge so the boat would hold more passengers, meant that he needed additional crew to serve as lookout but the ferry company denied his request.

The ferry was heading for the Isle of Wight from Southampton at the time of the accident, traveling at 13.5 knots. Peter Jackson and his wife, Julie, were also heading for the Isle of Wight on their Doral 32 Phoenix with her brother and sister-in-law. They were cruising at about six knots, keeping a slow speed because Deborah Baxter, the sister-in-law, was prone to sea sickness. The day was clear and sunny with good visibility.

The ferry started a turn to port and its starboard side hit the port side of the Phoenix. Drummond and the other officers on the bridge did not know they hit anything until passengers from the upper deck informed the crew there. Investigators said the ferry pinned the Phoenix against the bow for 18 seconds. “I heard a loud crashing noise,” Deborah Baxter said. “I could see a wall of red. I could not believe it. The ferry had carried on without stopping.”

A sailor who was cruising nearby said the Phoenix listed to one side and then “semi-submerged” before righting itself. The Phoenix limped into Cowes on one engine, escorted by a lifeboat. The collision split its hull-to-deck joint, detached sections of the superstructure and caused some hull deformation. There was no damage to the ferry.