You are at:Home»On Watch»Cruising in Mexico: “What We’ve Learned So Far” 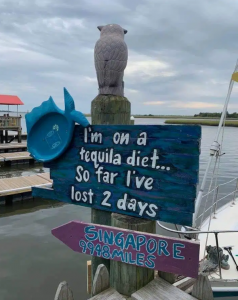 After cruising in Mexico since October on their 2005 Nordhavn 55 Red Rover, Kevin and Allison Jeffries took a break recently to fly home to Seattle for the big boat show there. The time away from the boat gave them the chance to reflect on their trip, and to put together some thoughts that might help other cruising people heading that way.

The Jeffries (and their two shelter dogs, Zoe and Max) are hardly new to cruising. They’ve put more than 6,000 nm under their hull since they sold their house in Seattle and moved aboard Red Rover full time in 2016. A lot of those miles were in the Pacific Northwest and Alaska; this was their first trip to Mexico.

At first they cruised down to the tip of Baja California with some other Nordhavns (after the Nordhavn Film Festival in Dana Point, California), and then continued south to Puerto Vallarta (see top picture), La Cruz and Barra de Navidad. Here, writing on their blog, comeonrover.com, is what they say they’ve learned so far.

First, the favorite topic of conversation among all the cruisers they met, on powerboats and sailboats, was parts. Where to find them, how much to pay for them. When you can find them, they often cost twice as much as they do in the U.S. The Jeffries wrote that they will be carrying bags of parts for friends when they fly back to Mexico.

Then, everything takes longer than you think. Checking in and out of a  port can take half a day. They had expected land transportation to be a problem, but they had not expected a trip to the grocery store to take three or four hours, when they could find one.

The Jeffries write that they are spending less money overall, but some things are more expensive. Groceries are much less expensive “and the farmers’ markets are awesome.” Moorage costs vary enormously, from $.86 a foot at Marina Vallarta to $3.50 a foot at Marina Coral in Ensenada; at one point, they had to pay more in marina charges for a month  than they were paying as liveaboards at Shilshole in Seattle. And then power is always extra, sometimes much extra. They paid $700 for a month of power at La Cruz.

They also were surprised by the anchorages down the Mexico coast. “There aren’t absolutely tons of anchorages. And the ones that do exist can be completely unusable, or uncomfortable if the ocean swell is coming into the anchorage.”

The Jeffries reported that the boat is running well, and they were very happy they put in a second genset, a Northern Lights 6kW, so they can run the AC at night at anchor without having to load up the main 20kW. They also were pleased they added a UV filter for the fresh water system, since “very few marinas offer potable water. “

Finally, they’ve settled in to their own cruising style, with what they call a better balance of urban and remote destinations. They say they want to feel more connected to the people in each place they visit. “Owning a Nordhavn (to us) is not about going tens of thousands of miles a year. It is about engaging  with the people we meet in the places we so. So we’ll go a little slower. And enjoy the ride.” Read more: