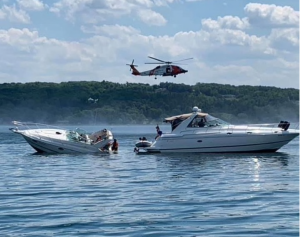 The Coast Guard said they received a distress call about 2:30 on Friday afternoon saying that a boat was taking on water in the bay along Lake Michigan. In response, the Coast Guard sent a 45-foot boat and a Jayhawk helicopter. The helicopter arrived about 20 minutes later and deployed its rescue swimmer.

The swimmer started to transfer people from the sinking boat to a Good Samaritan boat that had arrived at the scene. But the boat started to sink before he could rescue everyone, and people were forced into the cold water.

The boat carried 75 gallons of fuel when it sank in 250 feet of water, but there were no signs of pollution.

Coast Guard Commander Amy Florentino, the deputy sector commander, said the accident showed the need for boats to carry safety equipment and a working VHF radio. “In this case,” she said, “the mariner was able to use a VHF radio to communicate with us that they needed help, which allowed the Coast Guard and other boaters to get to the scene quickly.” See the video in the first link below: