You are at:Home»On Watch»First Two Nordhavn 41s Heading for California

Nordhavn has just shipped the first two hulls of its new 41 world cruiser from the factory in Turkey. They are on their way to the company’s headquarters in Dana Point, California.

The smallest vessel in Nordhavn’s fleet, the new 41 is the successor to the Nordhavn 40 that circled the globe in 2001 and 2002. Over the years, Nordhavn built 69 hulls of the 40, the company’s previous smallest passagemaker. It set the world record for a fastest circumnavigation by a production powerboat.

So far, the 41 has become something of a home run for the company, setting records for pre-orders. Indeed, Nordhavn says it already has commitments for the first 22 hulls. 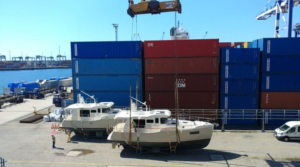 Many of those buyers will be able to take sea trials on the boats once they reach Dana Point and undergo a fast commissioning. Nordhavn hopes to have an open house on the 41 for other clients later in the year.

The new 41 is designed to go anywhere, with a range of more than 3,000 nm at a cruising speed of about 7 knots. It’s powered by two 75-hp Beta diesels, protected by a long keel. It has a CE rating of Category A, the highest level of safety.

Inside, the 41 has a large master cabin forward. A second cabin can be tucked under the helm on the starboard side. Two more people can sleep on the convertible sofa in the salon. The galley is up, on the port side, opposite a two-person helm seat.