Will your next RIB be powered by an all-electric outboard? It will indeed, if Andy Rebele, the founder and CEO of Pure Watercraft in Seattle, has anything to say about it.

Started in 2011, Pure just got a major infusion of cash, some $23.4 million in Series A funding, to expand its Pure Outboard business. The funding was led by L37 Ventures, a San Francisco venture capital firm that specializes in disrupting markets, with help from some Amazon executives and others.

The new money will let Pure expand its operations in Seattle. It has already been beta testing its first 1,000 all-electric outboards; now it plans to ramp up manufacturing and start shipping in time for the 2021 boating season.

The appeal is that the all-electric outboard is silent, it has no fumes or emissions, it’s lighter than a gas counterpart, it has no scheduled maintenance (with very few moving parts), and it should last a decade. A refill costs just a few dollars’ worth of electricity. 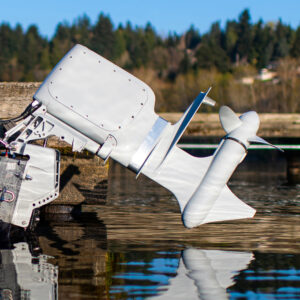 Rebele takes “the Model T approach” to the business, offering exactly one model. He says the most popular outboard in the world is the 40-horsepower gas motor, and that’s what he hopes to replace. His Pure Outboard package consists of a 105-pound motor ($6,000); a 115-pound lithium-ion battery ($8,500), and a battery charger ($2,000). All the components can be shipped by UPS.