The new, composite-built, custom C.W. Hood 57 was just launched at the Lyman-Morse yard in Thomaston, Maine. With power from twin 1,000-hp Volvo IPS 1350 pod drives, the new Hood is a marriage of classic lines and state-of-the-art performance. Indeed, it tops out at just under 40 knots.

With its Down East lines, sharp entry, long sheer and beautiful tumblehome, the Hood 57 is an unusual collaboration, starting with Chris Hood, the head of C.W. Hood Yachts in Marblehead, Massachusetts, Stephens Waring Yacht Design in Belfast, Maine, and  Lyman-Morse.

It started when an owner approached Hood about repowering his 26-foot boat, and things just grew from there. The owner’s main charge was to reduce the boat’s weight to guarantee its performance while maintaining the strength needed in a long-range cruiser. 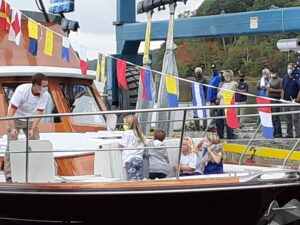 To accomplish this, Stephens Waring decided on an innovative composite construction using both wood and fiberglass; the hull is built with strip-planked fir and resin-infused fiberglass. The boat then was built with four major hull panels made with cold-molded wood with composite girders.

The four panels include the bottom module, which is 50 feet by 15 feet, both port and starboard topside panels, and a curved transom section. As the end of the process, a structural inner skin was vacuum bagged in place for the topsides, and the four separate panels were joined together to create a structural monocoque assembly.

The Hood’s interior revolves around the open salon, with drop-down electric windows and a helm with a sports-car look. The galley is midlevel, and the lower deck has accommodations for four. The owner’s suite is forward, with an en suite head and a large shower. There’s also a small guest cabin with an office desk; it shares the day head.

In the cockpit, both sides are open for easy access to the transom and the water. The entire cockpit sole lifts up under hydraulic power for engine access. Up top, the helm offers views all around. A “rumble seat” is on the foredeck.