The Absolute Yachts Navetta 64 just won the Best Innovation of 2020 award at the World Yachts Trophies event in Cannes for its creative day-and-night beach club that opens from two slightly curved, watertight doors in the transom. By day, it serves as a patio or lounge on the ocean; by night, it’s an extra VIP stateroom with its own head and shower, a lot of privacy, and a chance to go swimming whenever the mood strikes.

The new Navetta 64 is distinguished by other singular design trends, particularly the super-sized windows in the hull sides forward, and the unusual cutout openings in the side gunwales aft. It also is unusual in placing the master stateroom in the bow, with a full-beam head and shower compartment. 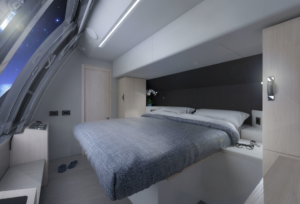 But it’s the innovative, air-conditioned beach club that draws the most attention. By day, an overhead screen provides protection from the sun while you relax on the wide swim platform. Inside, a large couch faces the ocean, and two deck chairs offer more seating. There’s also a fridge, an entertainment center with a TV, and two wardrobes. By night, the sofa converts to a queen bed, and the club becomes a very private VIP cabin. In the morning, guests can simply walk out for an early swim.

The Navetta 64 also has a large flybridge, with an open aft area for sunning and lounging. It has a climate-controlled helm station, with a bar and dinette forward under a hardtop.

On the main deck, the galley is aft and the salon, with large side windows, has settees on each side; the deck is flush until you reach three steps that lead up to the centered helm station. A large separate sunning and lounging area is on the foredeck.

Below, there are two more staterooms in addition to the master. The VIP cabin is midships on the port side while the third smaller cabin is to starboard; both have en suite heads and showers. A crew cabin with a head is to starboard with a private entrance from the side deck.