Now’s your chance to get a Porsche-designed yacht to go with your Panamera, Cayenne or even an old 911. The 135-foot, 37-knot Royal Falcon One, first launched in the summer of 2019 and listed by Camper & Nicholsons, is on the market again. Campers says it will provide the price for what it calls a spaceship on the water “upon application.”

The yacht was built by the Kockums yard in Sweden as part of the Royal Falcon Fleet in Singapore. Porsche Design Studio drew the lines, working with the naval architects Incat Crowther. The entire project took ten years. 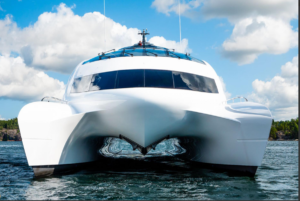 Porsche said its brief was to design a unique yacht, one that did not look like any other. It developed the catamaran hull to represent speed and dynamics. The two hulls were designed to create the impression of a stance, like the track of a sports car.

The super-modern interior, using only the finest materials, has four decks and five staterooms. The master is full beam (41 feet) and has its own balcony and dining area. It and the VIP suite are on the upper deck. The other three staterooms are on the main deck; two crew quarters are in the hulls. An observation lounge forward in the salon offers panoramic views. There’s a Jacuzzi up top, and a large tender garage aft. 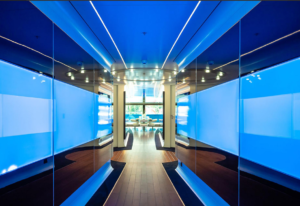 Campers says the aluminum-hulled yacht is in immaculate condition and has both “low engine hours” and “low fuel consumption.”