You are at:Home»Boat Reviews»New 43-Knot Back Cove 39O Down-East Cruiser

Back Cove just launched its new 39O, and it’s the fastest and quietest Back Cove yet. Indeed, powered by three 400-hp Mercury Verado outboards, the new Maine-built cruiser tops out at 43 knots, and it’s so efficient it has a range of 300 nm at 30 knots, a remarkable performance. It also registers a sound level of just 73 dB(a) at the helm, which means you can talk and listen to your playlist and generally enjoy yourself on a long day’s cruise. (See the boat’s performance numbers at the end of this story.)

The 39O is Back Cove’s second outboard boat, and it builds on the success of the 34O, which was named the Best New Powerboat Under 35 Feet when it was launched at the Newport show in 2018; it also won the People’s Choice Award there. The 39O also continues Back Cove’s easy-to-use and easy-to-enjoy cruising philosophy. Back Cove is a sister company to Sabre Yachts.

The Back Cove lineup stretches from 30 to 41 feet. With its handsome, traditional Down East lines, the 39O can serve as a long-range cruising boat for a couple or a small family, or a round-the-bay day cruiser for an owner who wants to take along a lot of friends. It’s big enough to handle the rough stuff, and small enough for single-handing, particularly with the highly maneuverable outboards and the standard bow thruster.

You can walk on the boat from the teak swim platform that extends on both sides and forward of the outboards, and then enter the cockpit via stainless steel gates, also on both sides. A large settee is aft, with a table for dining or cocktails; another two-person seat is forward on the port side, facing aft. An optional grill can be stored under the aft-facing seat. The lazarette under the cockpit sole is large enough to hold a 9kW genset and a folding bike or even a small inflatable tender.

You enter the salon through a folding glass door. A window over the aft-facing seat also opens, to help join the cockpit and salon as a large social space. The entire salon/helm deck is enclosed, so that cruising is comfortable in both warm and cold weather.

A U-shaped settee is to port, with a cherry table; the galley is to starboard, and is fully equipped for cruising. A 32-inch TV drops down from above the galley so you can watch from the port-side settee.

The helm has matching captain and mate chairs. There’s more storage space under the chairs, or room for an optional freezer. The helm panel is large enough for two 17-inch multi-function displays.

Below, a two-berth cabin is under the helm deck, while a lounge space, bathed in light coming down from the large windshield, is a bit forward on the port side. It faces a TV, and it also would be an inviting place to relax with a good book. The head, with a large, separate shower, is to starboard.

The master cabin is forward, with a queen-sized island berth and enough storage space for a long cruise. It has a private entry to the head and shower.

Air draft on the new 39O is only an even 13 feet, so the boat should be able to slide under a lot of bridges in Florida, for example, or even the Great Loop.

The boat has a modified deep-V hull with a patented hull-flat aft. On its cruise from the plant in Rockland to DeMillo’s in Portland, the boat provided a dry, comfortable, fast ride, with a good-looking running attitude. The first hull is going to an owner in Charleston, S.C. 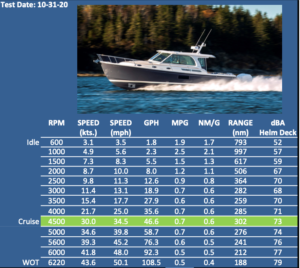 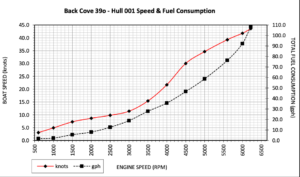