Alva Yachts just announced that they are building an Eco Cruiser 50, the first monohull electric-powered yacht. The new Eco Cruiser will be powered by two electric motors producing a total of 272 hp with solar panels and the option of hydrogen fuel cells for totally self-sufficient, green, emissions-free cruising.

Designed by Henndesign, the new 50, the smallest yacht in the Alva fleet, was designed specifically for electric propulsion. The two electric motors deliver 100 kW each. Power comes from a 50 kVA generator and from solar glass tiles on the rooftop, producing 4.9 kWp and stored in a 140 or 240 kWh battery pack.

For totally green cruising, the generator can be replaced by a hydrogen fuel cell, and the normal fuel tank replaced by hydrogen storage tanks. At that point, the owner can cruise in total silence with no emissions.

Another possibility is what Alva calls the Power Version of the Eco Cruiser 50, with two 230 kW electric motors for a total of 625 hp and a top speed of 20 knots. The standard version has a cruising speed of 8 to 10 knots and a top speed of 16 knots. 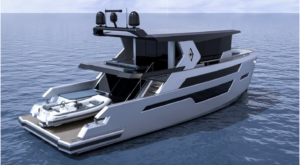 The standard layout of the Eco Cruiser 50 features a beach club on the aft deck that’s large enough to hold a tender or a jet ski or several sun pads. An owner can choose from a three- or four-cabin layout. In the three-cabin version, the cabins are in the lower deck and the upper deck becomes one large space with a wet bar, sofas, coffee table and helm station. In the four-cabin version, the master cabin is on the upper deck, just behind the helm station, with a double bed, office/vanity, and a large head with shower.

Alva Yachts was started early this year in Bad Pymont in northern Germany. It already has 60- and 90-foot catamarans under construction, and an 82-foot electric-assisted sailboat as well.