Alva Yachts, the fairly new German builder, is making a 90-foot flagship all-electric power cat that has trans-Atlantic range and a cruising speed of 8 to 10 knots.

The entire surface of the new Alva 90 is covered with solar body panels; the solar modules have been adapted to the shape of the yacht. They produce 40 kWp; the battery capacity is 240 kWh. The luxurious cat is powered by two 500kW electric drive motors and two 100 kVA generators. A hydrogen fuel cell and storage tank are an option.

The yacht also comes in a hybrid diesel-electric option, with the same electric motors plus two 456-kW diesels. In this configuration,  the fuel capacity increases from the 396 gallons in the electric mode up to 1,320 gallons. And the speed bumps up to 15-16 knots.

The Alva 90 is made for silent operation, with no emissions, smoke or vibration. But it also stands out for its singular styling, by Henndesign, with aggressive sharp lines and overwhelming size. There are no curves on this yacht, no distractions. Even the side windows on the lower deck all have straight lines.

For size, take a look at the person on the foredeck in the rendering above. The yacht is huge, in every direction. At more than 45 feet, the beam is half the size of the yacht’s length, providing space and more space on all three decks.

The accommodations are on the lower deck, with the master stateroom occupying most of the starboard hull. The stateroom is amidships, and part of the hull folds out for now almost-obligatory lounging area over the sea. Then there’s dressing room moving aft, and a large, luxurious head aft of that. 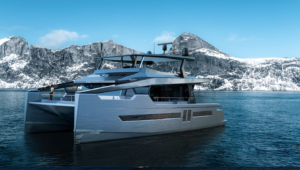 The yacht can be heavily customized, but in the standard version there are three staterooms in the port hull – a VIP cabin forward, a mid-cabin that looks about the same size, and then a smaller cabin aft with two beds.

Both the foredeck and aft deck have enormous lounging areas. The flybridge, protected by a hardtop, has two seats at the upper helm plus an outdoor dining area and multiple lounging and sunning spots. For its part, the salon is bathed in natural light from windows all around, and it can be customized per the owner’s wishes.