You are at:Home»Cruising Life»Classic Huckins, Restored with IPS, Now for Sale

Yachting Solutions specializes in restoring classic boats, as well as selling new ones. It completed the restoration of the Huckins, named Northern Spy, back in 2012. The boat was the first existing boat to have a factory-authorized repower with IPS drives.

The original Huckins, made in the same yard in Jacksonville, Florida, that produced scores of PT boats just a decade earlier, was powered by twin Cummins diesels with V drives. With the new Volvos, Northern Spy cruised at 20 knots and topped out at 28 knots, at least 8 knots faster than with the original engines. But it also is much easier to handle with Volvo’s IPS fingertip joystick control and Volvo’s Dynamic Positioning, which keeps the yacht in place while waiting for a fuel dock or a bridge or for any other reason at all. 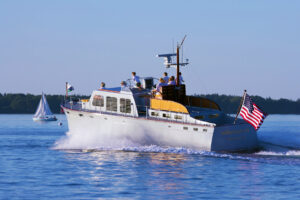 The restoration took a year. Yachting Solutions reworked the entire bottom, replacing the frames, keel and stem. To support the new Volvo engines and pods, an integrated reinforced epoxy structure was laminated into the hull. The boat was Awlgripped from top to bottom in a haze gray color.

In addition, the interior joinery on the two-cabin, two-head Huckins was refinished and updated, and the boat received a new 9kW Kohler genset, new plumbing, all new or updated wiring, new refrigeration, new electronics, and much more.

Bob Chace, at Yachting Solutions, told me the boat is now “in great shape” and ready to cruise this summer. “All the heavy lifting has already been done,” he said. The boat is for sale for $699,000.