Cruisers Yachts of Oconto, Wisconsin, is on a roll. It’s enjoying rave reviews of its new 42 GLS with its fold-down bulwarks and three outboards, it has a strengthening dealer network, and it just bought the former Carver and Marquis plant in nearby Pulaski so it will have more room to expand.

The good news about boating, of course, is not limited to Cruisers. Boat sales across the United States have been booming for the past year because of the pandemic. The National Marine Manufacturers Association just reported that sales of new powerboats in February were up 34 percent, compared to the same time last year. “Inventory levels of new boats are the leanest they’ve ever been, and boats are being sold as they hit the marketplace,” said Vicky Yu, the NMMA’s director of business intelligence.

At Cruisers, the 54 Cantius is one of the company’s most popular yachts, for a lot of reasons. First off, it’s the right size. At 54 feet it’s still small enough so a couple can handle it easily, particularly since it comes with Volvo’s IPS pod drives and joystick control for fingertip docking. But with three staterooms and two heads, its large enough to carry a family, or two couples, for a comfortable on-board vacation. For entertaining, the cockpit alone can hold ten people. And the boat’s 16’ 5” of air draft (to the top of the mast light) means it’s low enough to slide under most of the bridges on the Great Loop or the ICW. 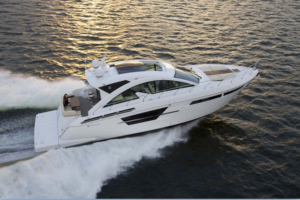 To make moving around the boat easy, everything is on one level, from the transom to the helm station. The cockpit has U-shaped seating with a hi-low table that can be converted to a sun pad, and it has an electric grill and a wet bar with two bar stools on the port side. An electric window can be lowered to open directly to the galley, aft in the salon. A SureShade awning provides protection overhead.

In the salon, the galley, aft on the port side, is fully equipped for cruising. There’s a small sofa on the starboard side and then forward to port is a raised dinette with wraparound lounge seating. There’s two-person seating facing the helm. A retractable sun roof lets in light and air; there are windows all around.

Below, there’s a lower lounge at the foot of the stairs, with a sofa to starboard and an open countertop to port with a wine cabinet below and a TV above. The master stateroom is amidships, with a walk-around queen-sized bed. It also has a café table with two seats, a vanity, built-in nightstands, and an en suite head and shower.

The VIP cabin is forward, also with a queen-sized bed. The head is on the port side, while the shower is to starboard. The third cabin is on the starboard side with two bunk beds, a TV and storage.