You are at:Home»Charter»Captain of Dream Charter “Odorous” and “Abusive” Suits Say

Here’s a story about a dream charter in the Bahamas over the Christmas holidays that went terribly wrong, ending with two lawsuits seeking $10 million in damages and charging that the captain was “odorous, ill-tempered, curt and dismissive, outright angry and abusive.” The suits also say that instead of dropping the passengers off on Exuma Island, he cruised back to Nassau, leading to “false imprisonment” and “panic attacks, trauma, fear of death.”

Last December, Eugene Melnyk, 61, the owner of the NFL Ottawa Senators, chartered Dream so he and his girlfriend, Sharilyne Anderson, could “escape their Canadian isolated existence and spend the holidays with family and friends,” according to the suits. 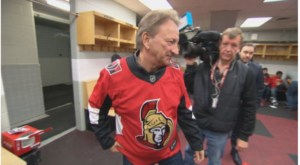 They boarded the boat in Nassau, and spent a few days together before their friends and family joined them. In the suits, filed in U.S. Federal Court in southern Florida, the problems started when Melnyk told the captain he wanted to go down to the Exumas directly, but the captain, aware of the yacht’s draft in the shallow waters along the way, went out into the Atlantic and around Eleuthera to Norman’s Cay.

The suits allege that the captain “appeared angry and resentful that a charterer would deem to intrude on his alleged specialized knowledge, experience and authority,” and that he “sought instead to punish the charterer and his party for their insolence through intentionally piloting the yacht into the open ocean.”

When the yacht was in the Atlantic, the suits say, the passengers were subjected to a “harrowing 10-15-hour ordeal,” and that Anderson “became violently ill, vomiting throughout the night.” After picking up other passengers, including Melnyk’s mother, Vera Melnyk,  they too were subjected to “violent bouts and illness” because of the captain’s “intentional and reckless conduct,” the suits say.

The conditions were so bad, the suits say, that “the passengers were again subjected to  hours of rough sailing, some having to crawl on all fours to be able to safely walk the decks of the ship.”

The two suits were filed by Anderson and Vera Melnyk and they each seek $5 million for “negligence, false imprisonment and intentional infliction of emotional distress” from the owner of the yacht, Dream Holdings Ltd. of the Cayman Islands. The owner has not yet responded to the suits. Read more: