You are at:Home»Boat Reviews»Lindell 38: Sturdy and Fast with Very Long Legs

The new Lindell 38 is a sturdy, fast, long-legged cruiser that has a range of 700 nm at about 30 knots. That means it can go from La Conner, Washington, to Ketchikan, Alaska, without refueling, or from New York to Miami with one stop, or just about anywhere on the Great Loop without having to worry about fuel or, because of its low profile, having to wait for a lot of bridge openings.

Lindell is well known on the West Coast, and is just starting to spread to the East Coast (a new owner plans to cruise the Northeast). The company was started by Jim Lindell, who grew up on Camano Island in Washington State; he built his first boat when he was 18 and moved on to producing 42-feet-long commercial gillnetters that were considered bulletproof. He eventually turned to making recreational powerboats with large cockpits, raked windshields and aggressive profiles.

Five years ago, Lindell sold the business to Brian Kott, a Tacoma surgeon, who’s now the CEO as well as the owner. Lindell makes a 42 and a 48, and recently introduced the 38 as its first outboard boat. Kott hired Greg Marshall, the naval architect who’s designed everything from work boats to the San Juan 38 and Westport 130, to design the 38 specifically for outboard propulsion. 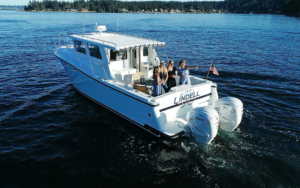 The Lindell 38 has a 20-degree deadrise at the transom for fast offshore performance, and it’s powered by twin 425-hp Yamaha XTO Offshore outboards. It cruises at 30 knots, and tops out, fully loaded, at 45 knots.

The boat has two cabins below, with one head and shower, and a large cockpit that can be set up for cruising for fishing. The hull is vacuum-infused fiberglass, using vinylester resin, and the only wood is for aesthetic purposes.

The master cabin in the bow and the guest cabin aft both have queen beds, and the convertible settee in the protected salon can sleep two more. The Lindell 38 comes with a full Garmin electronics package, a Seakeeper gyro stabilizer, and a cruising galley.