I remember testing the very first Back Cove, a 29, in Biscayne Bay off Miami, in 2003 with Bentley Collins, the company’s vice president of marketing and sales. I was the editorial director of both Yachting and Motorboating then, and I wrote in my notebook, twice, the words “I like this boat.” 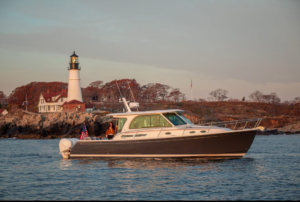 A major success story, Back Cove yachts have become popular for several reasons, and perhaps their looks is at the top of the list. They exemplify the modern Downeast, made-in-Maine looks that have been copied around the world, with classic, clean and eye-pleasing lines.

They also are user-friendly, in every sense, from the original single diesels, which also were fuel efficient, to the modest (almost non-existent) use of exterior teak. You basically could wash them and put them away at the end of a cruising or picnicking day on the water. They were priced right, and Back Cove  (and Sabre) developed a strong dealer network around the world.

Indeed, the 1,000th Back Cove was headed for Boston Yacht Sales, which also bought the first Back Cove, the 29, and the 500th (a 30). In Portland, Maine, and other locations in the Northeast, DiMillo’s is both a Sabre and Back Cove powerhouse dealer. Read more: