Nick and Robin, experienced cruisers, took delivery of their new Outer Reef 610 motoryacht Silver Skye last year. Earlier this summer, when Nick was cruising from Brielle, New Jersey, to Quincy, Massachusetts, with his friend Kurt, he ended up on a rescue mission. Here’s his first-hand account:

“Last Friday, as we were traveling from Hadley Harbor (a New England anchorage and cruising ground south of Cape Cod) in the Elizabeth Islands to Quincy, Massachusetts, I spotted what I initially thought was an individual on a jet ski.

“As I looked closer, I saw that he was waving frantically. I changed course, and as I came closer, I saw that it was a capsized skiff with two individuals on the overturned hull and three more in the water hanging on to the hull. 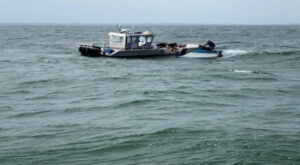 “We alerted the Coast Guard and attempted to approach the capsized vessel. However, the winds and sea state made it rather difficult.

“When we approached the scene, one of the individuals in the water, a woman, could not swim, and she looked particularly distressed. With the sea-state being what it was and winds gusting to nearly 20 knots, I was concerned about bringing Silver Skye alongside them as we were rocking quite a bit.

“We tried to keep the five occupants calm and assured them that help was on the way. The Mattapoisett Harbor Master was on the scene within about 20 minutes of our call to the Coast Guard. The Harbor Master and his assistant did a great job of getting the five victims on board.” Read more: