You are at:Home»Cruising Life»Whale Breaches Next to Small Boat. Pictures, Video

Here are amazing pictures and a video of a whale breaching next to a small center console, with an explanation of how the photographers captured the images. Read about it in this story from PetaPixel:

A photographer was on a whale-watching trip when he unexpectedly captured incredible photos of a large humpback whale exploding out of the water right next to an unsuspecting fisherman on his boat.

Photographer Douglas Croft was in California’s Monterey Bay on April 27th back in 2019 when the memorable moment occurred.

“It was quite exciting! Salmon season coincides with the time when humpbacks are returning to Monterey Bay to feed for the summer and there were hundreds of boats on the bay fishing,” Croft said.

Humpback whales will often do a series of breaches, so when Croft spotted this whale doing jumps, he made sure he was ready.

“This whale had breached a couple of times before this and many times they’ll just keep doing it,” the then 60-year-old photographer stated. 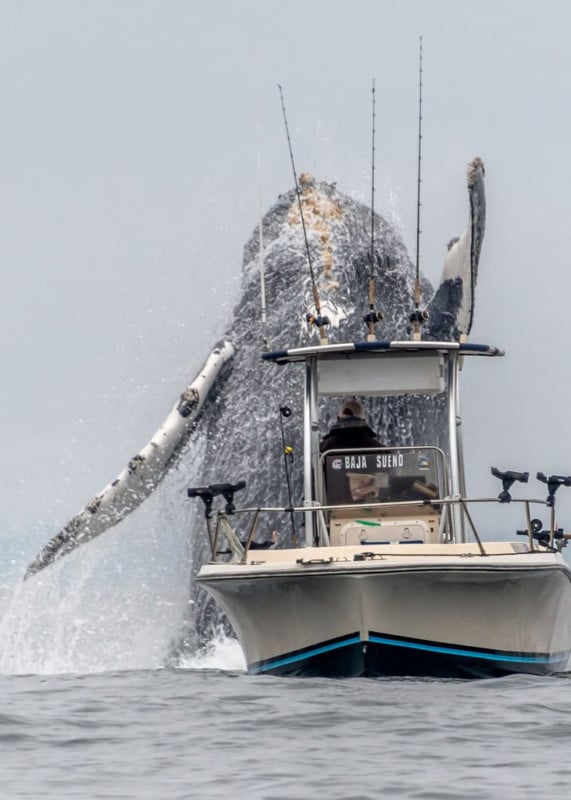 While most whale watchers may shoot from the deck in the open air, Croft managed to capture this special perspective showing the whale’s sheer size next to a fishing boat by going lower.

“I went below deck to shoot from a porthole close to the water line,” Croft said. “That’s what gives this amazing perspective of looking up at the whale.

“That the breach was directly behind the fishing boat makes really shows the size. Since the boat is closer, it should look bigger, but the whale is huge! If I’d been the fisherman, I’d probably need some new underwear.”

Croft writes that he was initially disappointed that the fishing boat had blocked his shot, but upon reviewing the results he realized that the boat actually helped make the once-in-a-lifetime photo.

“When this breach happened, I was annoyed that the fishing boat was in the way, but then I looked at the back of my camera and knew that it had been a fortuitous thing,” he states.

Fellow whale watcher Kate Cummings was able to capture a great video of this same breach from a higher perspective:

“The whale had already breached multiple times much further away from the fisherman,” Cummings said. “But sometimes when whales breach multiple times, they’re also heading a specific direction when they’re underwater building momentum for the next breach.

“I figured the next breach would be around the fisherman because the whale was heading that way and sure enough! Though I didn’t expect the whale and the boat to line up so perfectly.” Read more: