John Hauck, 82, just completed the Great Loop, again, by himself. Hauck finished the Loop, crossing his wake, 132 days after he left Demopolis, Alabama, on his Rosborough RF-246 named Grumpy.

For Hauck, the second Loop came almost two years after he completed it the first time, on Aug. 2, 2019, after he had cruised 6,303 miles in 110 days. He spent most of the time by himself on that trip, although a lady friend joined him for a short spell.

A retired Army special forces major who flew Cobra helicopter gunships for the 101st Airborne in the Vietnam war, Hauck wrote last week that he “enjoyed my first Great Loop and even more so the second time around.” He saw lots of old friends on the Loop, met some new ones, and even was able to visit with an old Army buddy, another helicopter pilot, in Michigan.

Hauck wrote about his trip on his Facebook page, saying, “Had I been traveling in a ‘normal’ larger trawler at one-third the speed of Grumpy’s cruise speed, it would have taken me more than a year to do the same route. I can assure you doing the Great Loop is a lot of fun, but there are a lot of boring stretches at 23 mph.” 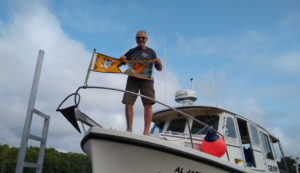 “I am extremely proud of Grumpy,” Hauck wrote, “such a tough little boat. I spent every night on board except two. Once I got settled in, I found it extremely easy to adjust and live 24/7 on a 25-foot boat.” He had internet service on all but two days on the Loop this time.

Hauck’s two times around the Loop provide some lessons for the rest of us. First, you don’t need a new, or even a large, boat for the Loop. Grumpy is a 2003 model that Hauck bought used.

But you do know how to navigate and read the weather. That’s not a problem for a former combat helicopter pilot, but it’s particularly important on a small boat.

Most important, perhaps, is that you need to know what you’re doing and have a serious sense of adventure.

Will Hauck do the Loop again? He said he didn’t know, but “It has certainly been a great learning experience and an exciting adventure for this 82-year-old kid.”

You can read more on Hauck’s Facebook page, Grumpy Does the Great Loop 2021, or at http://greatloop.org