For the last 70 million years, the Mississippi has flowed from north to south, emptying out in the Gulf of Mexico. But last Sunday, as Hurricane Ida made landfall with 150-mph winds at Port Fourchon, Louisiana, the river reversed course.

A U.S. Geological Survey gauge south of New Orleans registered “a negative flow” of the river. It rose seven feet and changed from running about two feet per second going south to half a foot per second going north. “That is extremely uncommon,” said a government hydrologist.

Ida devasted the area, leaving one million people without power and (ironically) water, before heading off to the northeast. On the river and along the coast, the result was devastating.

Just outside New Orleans, the Coast Guard reported more than a dozen “breakaway barges” on the river; one crashed into a bridge, making it structurally unsafe. The Cajun Navy, the all-volunteer group, rescued more than 300 people. Todd Terrill, the president of the group, said people were desperate, and rescuers risked their lives. “You hear something fly by your ear,” he said. “It’s a two-by-four, you know, a six-foot-long two-by-four.”

The shrimping fleet on Gold Isle, just north of Port Fourchon, was hit hard, as Ida destroyed 20 to 30 percent of the boats there. One shrimp boat caught fire before midnight and a crewman swam to shore. The fleet already had lost 60 percent of its revenue in the past year as the pandemic closed restaurants and the demand for shrimp dried up. Some 15,000 people work in the shrimp business there. Now, not only are the boats damaged, but 50 percent of the houses are unlivable. 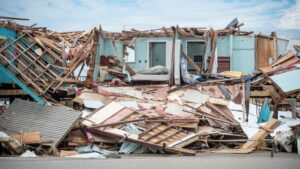 Grand Isle, the barrier island just east of Port Fourchon, was basically wiped out. “It made Katrina seem like a warm summer breeze,” one man told NBC News as he stood outside the few walls that remained upright in his home. Half the houses on the island were totally destroyed; all were damaged. A local official said the island, with a population of 1,400 people, was uninhabitable.

The Coast Guard mobilized forces from as far away as Cape Cod, Massachusetts. A Jayhawk helicopter landed on the beach in Grand Isle to search for people in distress. The crew found eight people, and two cats, in a severely damaged motel. It flew them out to safety.

All told, half a dozen people died in the area, including one man who was wading in flood waters just across Lake Pontchartrain from New Orleans. An alligator tore off his arm as his wife looked on. She ran to get help. He was never seen again. Read more: