You are at:Home»Cruising Life»Airline Pilot Commutes To Work on Ranger Tug

In the early 1900’s, New York businessmen discovered that the trip from Long Island and Connecticut to Wall Street in Manhattan could be accomplished faster and more luxuriously on a boat. They built some amazing fast commuters or business boats specifically for this purpose. Pan forward a hundred years and boat commuting still works. A resourceful airline pilot based in New York City and flying out of LaGuardia follows the lead of these early commuter boat pioneers by living aboard and commuting to work on a Ranger Tugs R-29.

Instead of staying in an expensive and tiny Manhattan apartment and relying on public transportation or airport shuttles to get to work, Ross lives comfortably aboard his Ranger Tug at Liberty Landing marina in New Jersey and other nearby locations. When he is flying, he drives the boat across the Hudson and up the East River to a dock near La Guardia airport where it stays while he is working. He finds that the boat has better accommodations than the New York apartments and hotels that pilots typically use. He has found convenient grocery and other shopping areas close to marinas where he can stock the boat easily. The commute is fast and fun; the boat not only provides transportation and a great place to live but also the ability to cruise and play in between work. 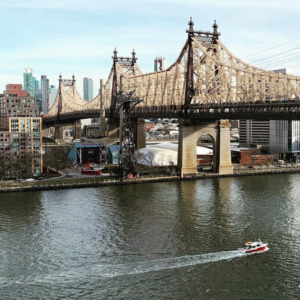 Ross has had many adventures on his R-29, before and after setting himself up as a New York City boat commuter. He started his voyage in Lake Michigan traversing the Chicago River system to the Mississippi and then connecting in Tennessee to the Tombigbee into the Gulf of Mexico. Moving from fresh water to salt he experienced a myriad of locks, canals, rivers, and channels. He emerged into the sea and was introduced to ocean tides and currents. His ocean cruising then took him through Florida and then up the Eastern seaboard, completing a good chunk of the Great Loop on his way to his new station in New York harbor. 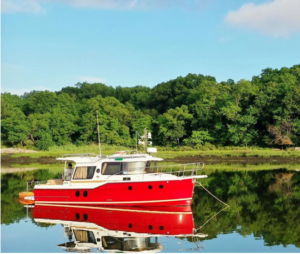 Currently based in New York, Ross not only lives and commutes to work aboard his Ranger Tug but when he has time off, he is able to cruise. His adventures have taken him into Long Island Sound, Oyster Bay, Essex and the Connecticut River, and up to Boston and other New England locations. Diverting into the Great Salt Pond in Block Island, he wound up anchored with a front row seat for 4th of July fireworks. The shallow draft of the R-29 let him tuck in and find a secure spot with a sandy bottom in the anchorage packed with holiday revelers. Read more: