You are at:Home»Cruising Life»Two Men Rescued after 29 Days at Sea

Two men were lost at sea and drifted for 29 days off the Solomon Islands before a passing fisherman rescued them. Their GPS stopped working during a heavy storm and they ran out of gas for their 60-hp motor. They survived by eating a sack of oranges they had brought with them and by collecting coconuts floating in the water.

The men, Livae Nanjikana, and his friend, Junior Qoloni, left Mono Island in the Solomons for a trip 125 miles south to the town of Noro, on New Georgia Island. They had taken the trip before, and didn’t think they would have any problems.

But a few hours after they left, they ran into heavy rain and strong winds. They couldn’t see the coastline they were trying to follow, and their GPS stopped functioning. They started drifting, and eventually ran out of gas. They used a small piece of canvas to collect rainwater. 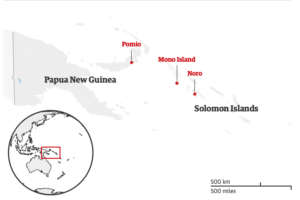 After 29 days, a fisherman spotted them. They had drifted 250 miles northwest, near Pomio in Papua New Guinea. They were so weak they had to be carried from the fisherman’s boat to a nearby house; they couldn’t walk.

But their spirits were intact. Indeed, Nanjikana told The Guardian, “I had no idea what was going on while I was out there. I didn’t hear about Covid or anything else. I look forward to going back home, but I guess it was a nice break from everything.”

The Solomon Sea that separates the Solomons from Papua New Guinea is notoriously rough and unpredictable. Read more: