Beneteau just introduced the new Gran Turismo 45, the flagship of it express cruiser line, at the Cannes Yachting Festival, and the boat is already available in the U.S. Powered by twin 440-hp Volvo IPS600 pod drives, the sleek and sporty two-cabin, two-head cruiser tops out at 33 knots.

Beneteau’s express cruiser line already has a 32, a 36, and more recently a 41. Now, the 45 extends the brand and makes it more attractive to families or owners who want to cruise with, or entertain, a larger group.

Relaxing and entertaining are certainly easy on the GT 45. The open aft sun deck has a super-sized U-shaped lounge surrounding a teak table and facing a wet bar with a sink, fridge and ice maker; the bar also houses a retractable TV. And an electric grill is housed in an extension of the sun deck.

The swim platform raises and lowers via hydraulics, and the tender garage with an electric door is under the aft deck. There’s also an electric winch to make retrieving the dinghy a bit easier.

Another social zone, and major sunning area, is on the foredeck, with an integrated sun pad with deck-level cushions. Flip-up headrests and a Bimini canopy are options.

The helm deck of the GT 45 is filled with light from large windows and an electrically operated sunroof in the hardtop. A two-person bench seat faces the helm. The new cruiser has a joystick and a bow thruster to help with docking and low-speed maneuvering. 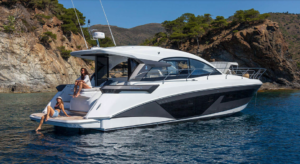 The new 45 makes the most of the new trend toward creating an indoor-outdoor environment between the helm deck and the aft deck. It has a full glass bulkhead aft for protection from the weather, but it can be opened for fresh air. Push a button and a large window on the starboard side hinges up into the hardtop roof.

Below, the boat has a salon area and a well-equipped galley. The owner’s stateroom is amidships with large hull side windows and its own head and shower. The VIP cabin is forward with scissor berths that can be arranged as a double bed or two singles. That cabin has access to the second head and shower, which also can be reached from the salon.