The new Greenline, the flagship of the Slovenian company’s fleet, can run on diesel or solar/electric power, giving an owner the option of operating a silent, emissions-free  vessel for up to 1,000 nm at 5 knots.

The luxury yacht gets its green power from a 320kWh lithium battery bank paired to integrated solar panels on the hardtop over the flybridge. It can operate for as long as two days just on the batteries alone.

The boat also has a pair of 25kW diesel gensets that can power two 100kW electric motors up to a speed of 12 knots for a short period of time. Or, dialed back to 5 knots, they can take the boat up to its maximum range of the 1,000 nm. 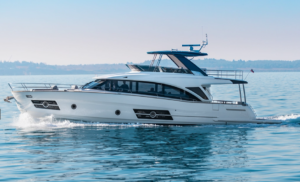 Greenline designed the 68 as a serious blue-water cruiser with a striking hull design. The swept back superstructure windows give it a modern, aggressive look.

The basic boat has three cabins with three heads. The main deck is built for one-level living and then, from the aft deck, it’s only two steps down to the swim platform. The aft deck has a large lounge and a table that can be lowered, with four portable chairs. It’s protected by the overhang from the flybridge.

The galley is aft in the salon and can be opened to the aft deck by folding sections of a stainless-steel framed door. The galley is on the port side; an L-shaped lounge and table are to starboard.

Up on the flybridge, a large lounge wraps around a table on the starboard side. For entertaining, there’s a bar with a sink and ice maker, plus an electric grill. Forward of the upper helm, a cushioned area awaits guests who want to relax and lounge in the sun.

Below, the master stateroom is amidships, with a centerline berth and a sofa to starboard. Large windows with opening ports are on each side. The master head has his-and-hers sinks and a separate shower stall. The VIP stateroom is in the bow, also with large hull side windows and an en suite head with shower. The guest stateroom has two beds on the starboard side.