Researchers from the U.S. National Oceanic and Atmospheric Administration and the Coast Guard have found the wreck of the legendary U.S. Revenue Cutter Bear, which was lost at sea in 1963, about 90 miles south of Cape Sable in Nova Scotia.

NOAA and the Coast Guard, as well as some academic institutions, had been searching for the wreck for decades. The Bear had been one of the most significant ships in Coast Guard history. It was used by the Navy as part of the rescue for the Greely Expedition to the Arctic in 1884, and it actually saved a few survivors from the expedition.

The Bear then was transferred from the Treasury Department for service in the Arctic as a Revenue Cutter and patrolled the Arctic for 41 years, while both saving lives and dispensing some form of justice to that remote part of the world. 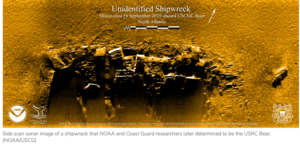 During the Second World War, the Bear was active on Greenland patrols, until it was decommissioned in 1944. The Bear later was sold to an owner who wanted to use it as a museum and waterfront restaurant in Philadelphia. It was lost at sea while being towed to its berth there.

Two years ago, a team from NOAA mapped 62 square miles of seabed where they thought the Bear had disappeared. Appropriately enough, they were working off the Coast Guard’s medium-endurance cutter named Bear, and they found two targets for further exploration.

Earlier this year, Coast Guard and NOAA researchers returned to the area, this time on the Coast Guard’s buoy tender Sycamore, with a high-tech, remotely operated vehicle (ROV) with high-res underwater video cameras.

Even though the sea conditions were challenging, they were able to collect enough still and video images to identify the wreck as that of the Bear. A team of historians and archaeologists agreed that they were “reasonably certain” about the identification. Read more: