You are at:Home»Boat Reviews»Absolute Sets New Bar with Windows on 56 Fly

Take a look at the rendering of the new Absolute 56, above, which seems to take the idea of large hull windows to an entirely new level.

Absolute calls the 56 Fly The Absolute Charisma, with the idea that it’s a representation of state-of-the-art Italian charm. One reason for the super-sized windows forward is that Absolute has moved the owner’s suite all the way to the bow in this boat.

In boats this size, the owner’s stateroom lately has been amidships. But in The Absolute Charisma, it’s full beam forward, with the panoramic windows. Absolute says the forward location gives the owner more privacy, particularly when the boat is docked stern-to.

In any event, this stateroom has a forward-facing double bed and a large shower room in the forepeak. The VIP cabin is full-beam amidships, where the owner’s cabin usually is. A third cabin is on the starboard side, with its head on the port side; that head doubles as the day head. A crew cabin with two bunks is at the stern.

Absolute says it designed the 56 Fly based on the wide acceptance of its 60 Fly (pictured below), which also has large hull windows, although not quite as large, it seems, in proportion to its length, as those on the 56. 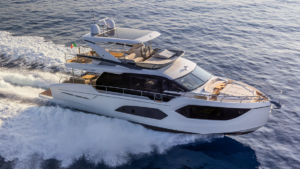 The Absolute 56 Fly does take other visual cues from the 60, including the beamy, fairly upright bow, the raked-back windshield, and the equally raked-back supports for the flybridge hardtop.

The full-height picture windows in the salon seem to align with the cutaway bulwarks for uninterrupted views out. The salon has a large U-shaped seating area and table aft while the helm has seats for two forward on the port side; L-shaped seating is opposite.

The boat will be powered by twin 600-hp Volvo IPS800 pod drives, which should produce a top speed in the 28- to 30-knot range. We don’t have any other details at this time.

The Absolute 56 Fly is scheduled to launch next spring. Read more: