The prize-winning, head-turning Okean 80 just made its U.S. debut at the Fort Lauderdale show. The flagship of the Okean fleet, the 80 was joined by a 50 Fly, the Brazilian builder’s first boat that was launched in 2017, and a 55.

The 80, with an unusual and innovative open plan, where balconies expand from the salon and aft cockpit and a wall of glass surrounds the main deck, won the Revelation of the Year award at the World Yachts Trophies in Cannes last year.

With an almost plumb bow, modern lines and luxurious fit and finish and furnishings, the Okean 80 would be a standout even without its transformer-like aspects. But its creative design includes balconies that fold out from both sides of the salon and the aft deck, adding about six feet to the beam.

And the amount of glazed glass is unusual. There are 360-degree, unobstructed views from the salon, which can be open to the aft deck. Other windows stretch along the sides of the accommodations deck, with vertical windows in the master stateroom amidships. 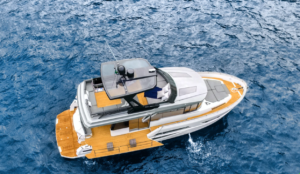 The treatment of the transom and the swim platform is another transformer-type affair. Push a button, and the transom opens up to reveal what the company calls a beach club, a room for relaxing and entertaining that has space for some sun lounges. Push another button and the center of the swim platform raises or lowers; down for water sports, up if you want to practice your diving. Either way, there’s room for more sun lounges on both sides.

Up top, the flybridge is protected by a carbon fiber hardtop. Three seats face the helm, and a dining table with chairs is just aft. An upper galley with a sink and a bar is on the starboard side, and more some lounges are aft.

Okean is represented in the U.S. by HMY Yachts.