You are at:Home»Boat Reviews»New Sea Ranger MMS 55: A Bulletproof Cruiser

Spoiler alert: Keep reading only if you’re interested in bulletproof expedition-type cruising boats made to tackle rough sea conditions anywhere in the world.

The new Sea Ranger MMS 55, made by a commercial yard in northern England, isn’t meant to stay at the dock. I don’t know how many people it can hold for cocktails or a sunset cruise around the harbor.

The Sea Ranger has a sturdy steel-plate hull; it weighs almost 60 tons. It comes with the looks and the performance of a North Sea trawler, with a high bow and decks lined with scuppers.

The new trawler carries a Category A offshore rating, so it should handle punishing sea conditions. It has a deep bilge keel and fin stabilizers to control roll, and bow and stern thrusters to make low-speed maneuvering easy.

The salon on the main deck opens up to the pilothouse, with doors leading to the port and starboard side decks. The galley and dinette are below, with three cabins – a double for the master and two guest cabins with bunk beds. There’s one head and shower. 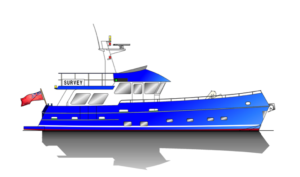 The foredeck carries a six-person Zodiac with a 15-hp outboard for exploring, plus a crane for launching and a liferaft for the worst-case scenario.

The boat was made by Rob Langton, the managing director of the MMS shipyard on the Humber. It also comes in a workboat version.