Longreach Power Catamarans from Australia are new players in the fast-growing international power cat market. They won’t launch their first boat until next year, but they’ve already sold several boats, including two of their most-popular 44-foot models to experienced cruisers in the U.S.

The company, based just outside Sydney, is making 58-foot and 40-foot production models in addition to the 44 (shown above). Brent Vaughan, director of Multihull Central, which sells Longreach, says that most have been sold to experienced catamaran sailors, including some who have circumnavigated the world.

All are built for long-range, blue-water cruising. The 44, powered by two Volvo IPS600 pod drives, has a top speed of 25 knots, and a range of 2,200 nm at 12 knots. Longreach offers the 44 in an eco version, with 2,000 watts of solar panels on the flybridge room, plus lithium batteries, to extend the range even farther.

The boat has smooth, slender hulls for low drag, and noteworthy docking keels to protect the running gear and provide for safe grounding (see picture below). It has large spaces throughout, taking advantage of a 21-foot-plus beam on a 44-foot length. 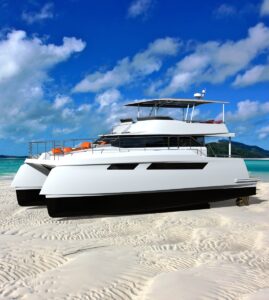 The flybridge is partially enclosed with quarter side windows and a hardtop. Three helm chairs are protected by a glass windshield; steps lead down to the foredeck. For entertaining and relaxing, there’s a wet bar and several seating areas. An internal staircase leads down to the salon, a nice feature to help with safe cruising.

The cockpit has custom foldaway seating aft and a dining table. A breakfast bar with stools is forward. The swim platform is hydraulic to lower for water sports and access to the RIB in the garage. There’s a separate compartment for dive tank bottles.

The salon is large, with windows all around; two hatches forward open for ventilation. The galley is aft, for access to the cockpit, and it’s well-equipped for cruising, including a full-height fridge. A sofa can be converted to an extra bed.

Below, the accommodations deck has three cabins, all with en suite heads and showers. The master has large side windows, four opening hatches, a king-sized bed and a walk-in wardrobe closet.