Maritimo, the well-respected Australian builder, just announced that it will have the global launches of three new yachts at the Sanctuary Cove show, on the Gold Coast just below Brisbane, starting May 19.

In the midst of an aggressive new-build campaign, Maritimo will introduce a new M600 Offshore, S600 Offshore, and an M60 at the show. It will launch the new S75 Sedan motor yacht, the company’s new flagship, later this year.

Tom Barry-Cotter, the company’s lead designer, says Maritimo is in its strongest position in history, with orders for some new models stretching into 2025. Maritimo recently has expanded both its workforce and its international dealer network.

The new M60, pictured here, is the latest iteration of the company’s first motor yacht, the Maritimo 60, launched in 2004. It was selected as Cruiser of  the Year and Australian Boat of the Year back then.

The M60 is a three-cabin luxury cruiser, powered by two 800-hp Volvos with shafts set at a low 8-degree angle for super efficiency. Its variable deadrise hull has a deep keel, sharp bow and flattened progression going aft for offshore cruising performance, stability and comfort. 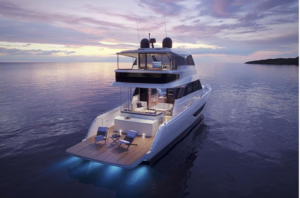 The new yacht’s “adventure deck” stretching out from the aft deck and cockpit is both eye-catching and functional, providing extra space for everything from water sports to lounging and picnicking al fresco. It extends from the lower cockpit area, and has room for a tender garage below. The large upper cockpit area has more entertaining, dining and lounging space.

A large galley connects the upper aft deck and the salon lounging area. The yacht has two-stage sliding windows there for light and ventilation.

Up top, the fully-enclosed, climate-controlled flybridge sky lounge has two lounging areas and a protected outdoor balcony deck aft. It’s connected to the salon via an internal staircase for ease and safety.

Below, the M60 makes use of the hull’s volume to create large, comfortable staterooms. The amidships master stateroom stretches across the full beam and features a king-sized bed and panoramic windows; it has a home-sized master head and shower. The VIP stateroom with an offset queen bed is forward, and a guest stateroom with twin beds is on the starboard side. It shares the second head with the VIP cabin.