Bering Yachts just launched its new 145-foot expedition yacht, the first in a new series, with an incredible range of 5,000 nm at 12 knots. The new Bering, named Heeus, also has an ice-class hull so it can explore Arctic and Antarctic waters safely.

The new 145 was launched at the Bering yard in Antalya, Turkey, with a displacement steel hull, aluminum superstructure and a reinforced “ice belt” amidships. It was built by in-house engineers and naval architects. 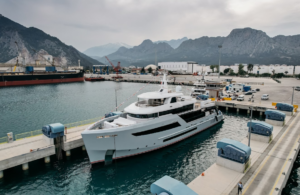 Six cabins can sleep up to 12 people, while four cabins and a captain’s cabin can hold 11 crew. The owner’s stateroom is toward the bow on the main deck, and has giant glass windows (measuring more than 100 square feet) for ocean views.

The sky lounge on the top deck has a large table seating a dozen people for al fresco dining, plus a bar and a Jacuzzi. A boat deck, capable of holding a 22-foot tender, is aft.

On the main deck, the new Bering has a vast salon, a dining room with a 12-seat table, and a luxurious lounge.

The foredeck has a large settee with a table, plus extra seating for two or three people, while the beach club all the way aft provides direct access to the water as well as to the garage that can hold a variety of water toys.