Jeanneau just launched its breakthrough DB43 premium day boat, starting a new style and a new line for the French builder. The first boat, powered by twin 380-hp Volvo diesels, has a top speed of 33 knots, and a range of 276 nm at 8 knots.

The DB43 represents a major move by Jeanneau, part of the Beneteau Group, a worldwide giant in both the power and sail markets. With its plumb bow, low profile and Euro-modern design, it is more reminiscent of a new Axopar or Pardo than of the traditional Jeanneau cruisers.

But that’s the point. The DB43, designed by Camillo Garroni, the Italian designer who did the interior and exterior styling, and Michael Peters, the American naval architect who did the hull, the new Jeanneau represents fresh thinking.

Jeanneau says the new DB43 will have the functionality of an express cruiser with the streamlined design of a top-tier day boat. The day boat or weekend cruiser market is a growing market segment both in Europe and the U.S. The new 43 will come in an outboard version for the U.S. market, with three 350-hp Mercury or Yamaha motors (pictured below). 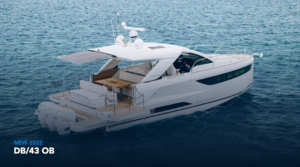 The stunning-looking boat has a versatile cockpit combined with accommodations for overnight, or longer, plus large terraces that fold out of the cockpit hull sides to increase living space by six feet; when they’re deployed, the overall beam there is 18’ 5.”

The first hull, introduced at the Palma show, has a head-turning silver hull; white is standard. A cabin top protects the helm as well as the social area amidships; an extra shade can be deployed to cover the lounges on the aft deck as well.

A large console aft of the three-seat helm holds a large galley with a grill and bar serving the aft deck, the major social area on the boat. A large swim platform, in the inboard version, helps to create a beach club effect aft, with a sofa that converts to a large sun pad. Another sun pad is on the bow.

The boat can hold eight people for day trips, and it has two cabins, and up to two heads, below, for overnighting. The main cabin benefits from lots of natural light flowing in from long hull side windows.