Lyman-Morse has float tested hull number one of its new Hood 35 LM series, and the graceful new express cruiser with classic Down East lines is getting ready for its owner soon.

Lyman-Morse, in Thomaston, Maine, is collaborating with C.W. Hood, in Marblehead, Massachusetts, on the new boat, incorporating quite a few innovations. The boat will be the first recreational in the U.S., for example, to use the new Hamilton HJX29 water jets. Its powerful, military-grade controls are paired to twin 480-hp Yanmars, producing a top speed of 40 knots.

The new Hood 35 LM, named Shadow, also will use Raymarine’s new Yacht Sense digital switching to keep track of all the systems on the boat, and it will be the first pleasure boat equipped for autonomous running with Sea Machines’ state-of-the-art systems. The owner is working with Sea Machines, a Boston startup with financing from Brunswick and Toyota AI Ventures, among others, to have the boat guide itself this summer. Last summer, Sea Machines started a collaboration with Rolls-Royce to develop and sell remote command and autonomous control for the marine market, including pleasure yachts. 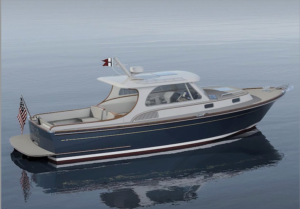 Built for weekend cruising, the Hood 35 LM has a cold-molded, wood composite hull using Douglas fir and western red cedar. It has a centerline queen berth below in the forepeak, with a galley on the port side and the head/shower to starboard. There are two flanking settees up in the salon, plus pedestal seats for the captain and mate.

Chris Hood worked with the owner, who previously had one of Hood’s Katama 30s, and wanted a larger boat. This is the second collaboration between Hood and Lyman-Morse, after Lyman-Morse built the C.W. Hood 57, designed by Hood and Stephens Waring Yacht Design in Belfast, Maine. Hood designed the new 35.