You are at:Home»On Watch»After Stroke, Nordhavn Owner To Cross Atlantic

In May, 2015, Philippe Guglielmetti, who was then running a 3-D printing business in San Francisco, was taking a vacation in Paris. He suffered a hemorrhagic stroke; it was so bad that when he got to the hospital he could only move a finger.

Now, after years of rehab, therapy and a spirit that doesn’t know how to quit, Guglielmetti is starting a trip from his new home in Miami across the Atlantic on his 2001 Nordhavn 40, appropriately named Embracing Life. He’s not only going across the Atlantic, to Lisbon, but he’s making a roundtrip, coming back to New York.

Guglielmetti was born in France 50 years ago, and started his first business when he was 19. He describes himself as a serial entrepreneur. Among other things, he was the CEO of Arcoa Yachts, a French builder; he founded Integra, an e-commerce business he sold to Verizon; he’s been a guest speaker at Ted Talks.

Before the stroke, Guglielmetti was an active man; he skied, he hiked, he rode motorcycles. The stroke ended all that. He suffers from ataxia, which affects balance and coordination and some fine motor skills. 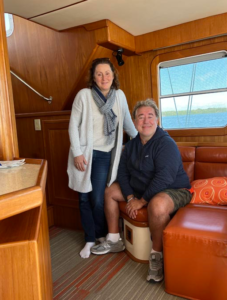 When he was in the hospital in Paris, his wife, Florence (in picture above), brought him a 3-D print of the Golden Gate bridge to put up on the wall. The idea was to motivate him to get better, with the goal of going home and walking across the bridge. In November, 2015, just a few months after the stroke, Guglielmetti did just that, as you can see in the video below.

The Guglielmettis moved to Miami in 2020; he seemed to do better in warmer climates. They had a house on a canal; they watched the boats go by. He thought up another goal, one that involved a much longer distance than walking across the Golden Gate Bridge.

He started looking for a boat to take across the Atlantic. This February, Guglielmetti bought the Nordhavn. Florence had to go on the boat with the broker while he waited on the dock for the first walkthrough. It was high tide and he couldn’t climb on board. She sent him pictures on her smartphone.

There was no question about the boat and its abilities to make a roundtrip across the Atlantic. After all, a similar Nordhavn 40 cruised around the world in 2001 and 2002.

But Guglielmetti had to make some changes to he could be comfortable on board. He added a helm chair, and replaced the wheel with a joystick. He added active stabilizers, and a stern thruster to help with docking. He moved his exercise equipment on board, to be monitored by a Belgian neuroscientist back in Miami.

He put in new electronics, including a Simrad autopilot, and bought an iridium phone. For safety, he also bought a Viking offshore life raft. The largest change was the addition of a 30-hp Yanmar wing engine and an auxiliary prop.

A rotating cast of crew will help Guglielmetti along the way, including his two sons (who have captains’ licenses) and his son-in-law.

It will be hard to miss the boat. Along the side it says, “From Miami to Bermuda to Lisbon to Azores to Bermuda to New York with captain Philippe, a stroke survivor with ataxia.” Read more at http://nordhavn.com and click on the link below to see Guglielmetti’s Golden Gate Bridge video: