Sunseeker has launched its new Manhattan 68, a luxurious cruiser with a 300-nm range, an open salon, and large areas of space on the aft deck, the beach club, and up on the flybridge.

The new 68 is the latest entry in Sunseeker’s prize-winning Manhattan lineup, and it has the contemporary European lines that make the company’s boats so popular. It’s a four-stateroom, three-head cruiser, with relaxing and entertaining spaces throughout, inside and out.

There are sunbathing areas on the foredeck and in the cockpit, for example, as well as on the flybridge, which is protected by an integrated hardtop. The flybridge also has the second helm, a wet bar, barbeque, fridge, and room for an owner’s choice of freestanding furniture.

The aft deck/cockpit has a teak deck and a lounge area and table aft. Four steps on each side lead down to the swim platform/beach club area. A hatch opens up in the transom with an upper area for storage with fenders and gear and dive bottles. A lower area holds two SeaBobs, with an electric charger, that are on the same level as the swim platform; you just slide them out to the water. 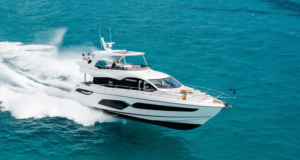 From the cockpit, full-width glass doors lead to the salon, with the galley, equipped for cruising, aft on the starboard side, and a dinette to port. Stairs there lead down to the amidships master stateroom. A large U-shaped lounge is forward to starboard; forward to port is an L-shaped seating area.

The helm seat is large enough for two adults, and it slides electrically so you can easily access the door that opens to the starboard side deck. The wheel has a series of buttons that you can push to control all the nav functions; you don’t have to lean forward to reach the touchscreen on the MFD.

Below, the VIP cabin is in the bow, with its own head. Two cabins are a bit aft; they share a head. And the master, with a large wardrobe, lounge and centerline queen bed, is aft, with a luxurious head and shower.

Sunseeker is offering a variety of MAN or Volvo IPS power options for the Manhattan 68, ranging up to 2,400-hp.