Rhea Marine, the well-regarded French builder, just launched its first, all-new 32 Timonier, a solid 45-knot cruiser with more than a touch of style and character.

The new 32 is powered by two 350-hp Suzuki outboards that promise speed plus a lot of fun behind the wheel. And there’s a lot to like here. The latest Rhea has deep bulwarks, walkaround decks, boarding gates, and a sliding door next to the helm so the captain has easy access to the side deck for line handling and docking.

Rich in details, with just enough teak to keep traditionalists happy, the Rhea 32 is designed for safe and easy cruising. It has sleeping for four below, plus a head with a pull-out shower, a totally protected wheelhouse/salon, and an aft deck for sunning and relaxing. The roof is flat so it can carry a variety of kayaks, SUPs or other water toys. 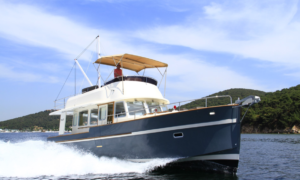 Rhea was founded in 1996 and now has a modern factory in La Rochelle, producing a line of open and trawler yachts in addition to the Timonier series. The trawlers include a 34, 36 (pictured above), and a 47.

In the 32 Timonier, the dinette on the starboard side has reversible backrests so it slides up to the helm for extra space around the table. The galley is aft on the port side, with a stainless steel sink, 12V fridge, and two-burner cooktop. An oven is optional.

Below, the master cabin is forward with a double berth, and a second cabin is a bit aft, tucked under the salon. It doesn’t have a lot of headroom, but it does have a large bed. There are lots of storage areas throughout the boat.